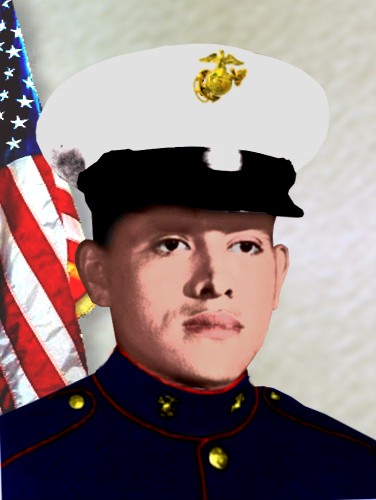 Jose Francisco Jimenez was born on March 20, 1946 in Mexico City, Mexico.  After attending schools in Mexico he attended elementary school and then Santa Cruz Valley Union High School in Eloy, Arizona, from which he graduated in June 1968.  He enlisted in the Marine Corps Reserve at Phoenix on June 7, 1968 and then enlisted in the regular Marine Corps on August 12, 1968.  Following recruit training at MCRD San Diego  he was ordered to Vietnam in February 1969 where he was assigned duty as a guide and fire team leader with Company K, 3rd Battalion, 7th Marines, 1st Marine Division.  He was promoted to Lance Corporal on June 16, 1969, and while participating in action against enemy forces near Da Nang in Quang Nam Province  on August 28, 1969, he was fatally wounded.  For his aggressive and heroic actions that day he was awarded the Medal of Honor.

The President of the United States in the name of The Congress takes pride in presenting the Medal Of Honor posthumously to Jose F. Jimenez, United States Marine Corps, for service as set forth in the following CITATION:  For conspicuous gallantry and intrepidity at the risk of his life above and beyond the call of duty while serving as a Fire Team Leader with Company K, Third Battalion, Seventh Marines, First Marine Division, in operations against the enemy in the Republic of Vietnam on 28 August 1969.  On that date Lance Corporal Jimenez' unit came under heavy attack by North Vietnamese Army soldiers concealed in well camouflaged emplacements.  Lance Corporal Jimenez reacted by seizing the initiative and plunging forward toward the enemy positions.  He personally destroyed several enemy personnel and silenced an antiaircraft weapon.  Shouting encouragement to his companions, Lance Corporal Jimenez continued his aggressive forward movement.  He slowly maneuvered to within ten feet of hostile soldiers who were firing automatic weapons from a trench and, in the face of vicious enemy fire, destroyed the position.  Although he was by now the target of concentrated fire from hostile gunners intent upon halting his assault, Lance Corporal Jimenez continued to press forward.  As he moved to attack another enemy soldier, he was mortally wounded.  Lance Corporal Jimenez' indomitable courage, aggressive fighting spirit and unfaltering devotion to duty upheld the highest traditions of the Marine Corps and of the United States Naval Service.  He gallantly gave his life for his country.

LCPL Jimenez was reportedly the 37th Hispanic-American to be awarded the Medal of Honor.  He has been buried at Panteon Municipal Cemetery in Morelia, Mexico.